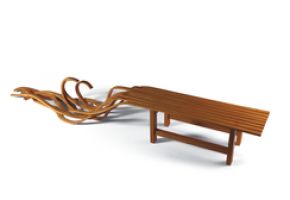 Pablo Reinoso is a French-Argentinian artist and designer.

The Silmo d'or president is an artist

Originally a sculptor but essentially an artist, Pablo Reinoso has practised his art in different forms since his early childhood. He created his first sculpture at the age of 13 and his first bench-sculpture at 15, but at the age of just six he had already made chairs and bookcases for himself and invented carts to race down the slopes of Plaza Francia in Buenos Aires…